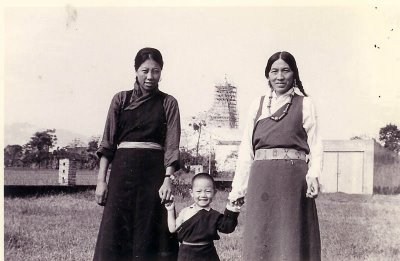 Last night was the yearly Thanksgiving party at Pam and Charles in Kathmandu and present was an old familiar face from the Boudha Stupa - Richard Tenzin. He has recently put up photos from the early days of the rockandrollraj under http://dutchbob.com/on the web, and among his pic I found this one, which you just have to see. The small tulku has his mother Chimey to the right and to his left is his grandmother, the consort of Dilgo Khyentse Rinpoche. The caption said "from the spring 1969" and you can see the stupa being repaired in the background.
Posted by Erik Pema Kunsang at 11/27/2005

The first time I saw this my first thought was, Oh my gosh these are family photos. I still think that -like looking at someone's family album. He is very cute - so happy looking.