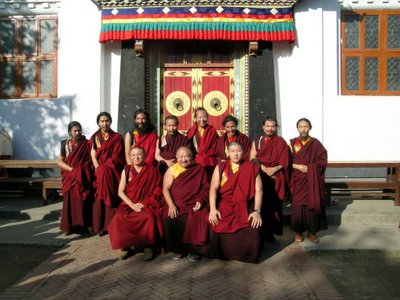 Monks with an earnest desire to devote themselves full-time to spiritual practice may, with the abbot's permission, set aside their academic studies and withdraw to the monastery's retreat center at the Asura Cave Temple in Pharping . In quiet and solitude, they may engage in either short retreats of a few weeks or undertake the traditional 3-year intensive meditation and practice retreat. Presently, a group of eight monks concluded a three-year retreat at the monastery's retreat center in Pharping and returnrd to the main monastery early this spring. The "big black beard" is lama Tenzin, right now teaching at Gomde in Denmark after a long visit in Gomde Austria/Germany.
These days, a new group is preparing to go into retreat - continuing the tradition of Tulku Urgyen Rinpoche and his sons.
Posted by Erik Pema Kunsang at 11/18/2005

Gee, where are the women?

I should have seen that one coming. . .
The women's retreat centers are located at Nagi Gompa and this year one group came out. I will post a photo tomorrow.

PS. A new retreat at Asura Cave Temple is starting in a few days, on Lhabab Duchen -- the day sacred for Buddha Shakyamuni having descended from a visit to the Tushita god realm to teach his mother.