Due to Tulku Urgyen Rinpoche's constant endeavor, a large temple structure was built around the Asura Cave of Padmasambhava. It is now continued and has been enlarged by Chokyi Nyima Rinpoche. Many groups of monks and many other people have since then been in the traditional three year retreat at this sacred location. Here you see one such group about to enter.
Posted by Erik Pema Kunsang at 12/17/2009 4 comments: 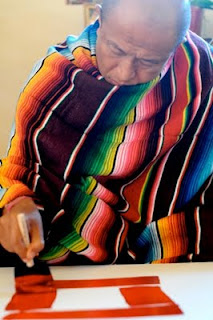 Don't miss this rare opportunity to bid on priceless original works of art by Lotus Outreach Chairman and Founder, Khyentse Norbu! 100% of proceeds from this exclusive 10-day auction will benefit the women and children served by Lotus Outreach in India and Cambodia. Adorn your home and support the cause. Place your bid now at http://shop.ebay.com/lotus_outreach/m.html?_nkw=&_armrs=1&_from=&_ipg=25!