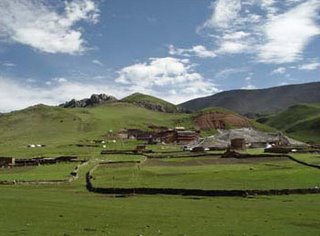 Adeu Rinpoche met Tulku Urgyen when he was quite young as he describes in this excerpt from an interview:

CTF: When did Rinpoche first meet Kyabje Tulku Urgyen Rinpoche?
Rinpoche: The first time I met Tulku Urgyen was when Samten Gyatso came and gave the extensive empowerments of Tukdrub Barchey Kunsel which lasted about an entire month. During this time Tulku Urgyen, we called him Tulku Karma Urgyen, acted as the shrine master and made all the tormas, he was also Samten Gyatso’s attendant together with another servent named Dudul. Another time we met was when Samten Gyatso was giving the Barom Kagyu empowerments and Tulku Urgyen alternated with another as umdze (chant master). On another occasion he came back with his father, Chimey Dorje, his brothers Pema Jigmé and Tenzin Dorje. They all came and it was during this time that I became good friends with Tulku Urgyen.

CTF: Could Rinpoche please tell us what Kyabje Tulku Urgyen was like at that time?
Rinpoche: I was really young, just a kid, and Tulku Urgyen was young too. He seemed to become quite fond of me and, you could say he would act as my babysitter. He was very skilled in different games, we would carve wood together and make drawings and masks. He was quite adept at these sorts of things, so he would distract me by playing with me. Sometimes he would run around with me on his shoulders. His brother, Tendzin Dorje, wasn’t interested in playing any games at all, he would just stay by himself and never do anything, so I never got close to him. But Tulku Urgyen was much more playful.