Drawings of the early masters in the Dzogchen lineage 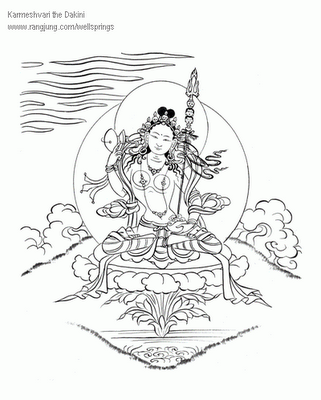 Samten Gyatso was Tulku Urgyen Rinpoche's main teacher and he was regarded as one of the emanations of the Indian master Vimalamitra. There is a fascinating story in Blazing Splendor about how a mind terma by the second Chokling of Tsikey was "confiscated" by Samten Gyatso. This unusual master also commissioned a lot of icon paintings which Tulku Urgyen Rinpoche brought with him to Nepal. And, since he was known to be a stickler for details and correctness, I have relied on them when the illustrations in Wellsprings were redrawn. Here you can see a slideshow of the line drawings included in Wellsprings, as well as a few others that didn't make it into the final version of the book. All the buddhas and masters were redrawn by Lhadripa Ngawang Zangpo.
Posted by Erik Pema Kunsang at 11/15/2006 7 comments: 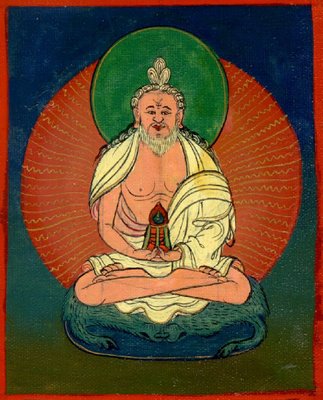 One of the most prominent historical figures in the Dzogchen lineage, and also in Blazing Splendor, is the amazing master Vimalamitra, a direct disciple of Shri Singha. When Padmasambhava arrived in Tibet, he perceived that the time was ready for Vimalamitra to teach the Great Perfection, and therefore bestowed his own lineage of Heart Essence upon only a few worthy disciples. The wisdom dakini Yeshe Tsogyal then concealed his teachings in the form of terma treasures for future generations. Padmasambhava’s profound hidden treasures containing his instructions on the Great Perfection are therefore primarily found among the revelations of the major tertön masters who have appeared over the centuries since the fifty-five years and six months Padmasambhava spent among the snowy ranges of Tibet.
Vimalamitra's lineage, however, was continued. I would like to introduce Wellsprings of the Great Perfection, (a new book from Rangjung Yeshe Publications), which contains many of his songs, excerpts from the Heart Essence of Vimalamitra and many other references. The first excerpt describes the mind transmission of the conquerors and the twelve Dzogchen buddhas, among whom Buddha Shakyamuni is the twelvth. Here is a record of his meeting with Shri Singha:

It was about then that the son of the king Dhahena Chadu and his wife Singha Shipitika, a monk known as Vimalamitra who was learned in the five topics of knowledge, yearned deeply to know the essential nature. He met Shri Singha and requested the meaning of the realized state, who then bestowed it in full and condensed the essential meaning for him in song:

Five poisons, unrejected, are the five great wisdoms,
While samsara, unrejected, is a timeless, perfect purity.
And once you realize your mind itself is buddha,
There is no state to realize apart from this awakened mind.

On hearing this, Vimalamitra understood the basic intent and then expressed his realization:

A spacious vast is dharmata, ungrasped by thought.
This space of mind itself defies imagination.
Within awakened mind which is no object to conceive,
The basic nature is not gained through cultivation.
Not wrought by meditation, timeless, empty, not apart,
The training is this sameness free of thinking.

The picture is a small painting commisioned by Samten Gyatso, who was Tulku Urgyen Rinpoche's primary teacher. It belong to an extraordinary collection of the early masters in the Dzogchen lineage now kept at the Ka-Nying Shedrub Ling monastery in Nepal.
Posted by Erik Pema Kunsang at 11/07/2006 2 comments: