Provocative film about the human's life and nourishment

Why would the issue or eating or not meat come up on this page?

Compassion and insight are the core values on the Buddha's path to enlightenment.

Here is a film about insight into how we live and feed made in a very compassionate way.

Hello friends of the Gomde centers, students of Tulku Urgyen Rinpoche and Chokyi Nyima Rinpoche, Tsikey Chokling Rinpoche and Phakchok Rinpoche, and you who have visited the Monastery in Nepal.

I have a query-question: do you have a small study or meditation group where you meet regularly, like minimum 8 people? Or are you interested in forming one? Chokyi Nyima Rinpoche would like to help you with Dharma materials in video/audio format.

Write to me and tell where you are in the world.

Warmest wishes from Erik
rangjung@gmail.com
Posted by Erik Pema Kunsang at 7/09/2010 No comments:

The streaming of this exciting event is offered for free. If you would like to support it, you are welcome to make a donation on the website.
Posted by Erik Pema Kunsang at 7/03/2010 No comments: 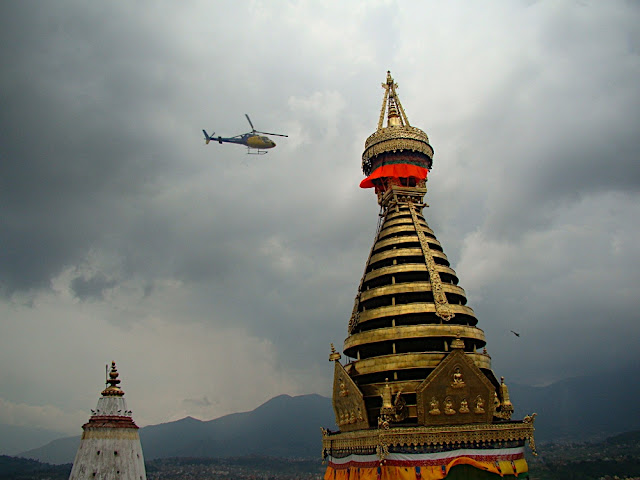 We are happy to share with you some photos (view slideshow) from some recent events held at Swayambhu: A May 27th National Peace and Unity Event and a three-day consecration Tibetan Puja, performed from the sky by His Holiness Trulshik Rinpoche. For the next couple of weeks we will continue with elaborate Vajrayana re-consecration pujas at Swayambhu performed by Newari priests from around the Kathmandu Valley.

Started in July 2008, the Renovation of Swayambhu was completed during the most auspicious month of Saga Dawa in May 2010. Involving many of the finest artisans in Nepal from Gold, Copper, Iron, and Wood traditions, the renovation involved the removal, repair and re-gilding of the vajra, mandala, nine shrines, harmika, spire, and cornice. To celebrate the completion of the work on the Stupa, a large peace and unity event was held on May 27th, 2010 - Buddha Jayanti.

Hundreds of thousands of people were invited to light a lamp for peace and unity in Nepal and the world. Thousands came to Swayambhu to light a lamp while other lit a lamp and observed a moment of silence at home or in their communities around the country and world. The entire event was live telecast. That evening, 13,000+ bags of sand supporting candles were placed around the Stupa, down the stairways, and along the main circumambulatory path. At 7:30 pm at Swayambhu Stupa, an official lamp lighting ceremony began with the ringing of bells, followed by a minute of silence. Then an old man and young man and lit a large butter-lamp, symbolizing the coming together of different generations to achieve peace and unity. Once the lamp was lit, a chorus of famous singers from Nepal sang a song of peace and the Stupa was lit up from all four sides. For hours people circumambulated the Stupa lighting lamps and enjoying the beautiful scene of the Stupa, bright and shining, on top of the heart of the Kathmandu Valley.