Before escaping Tibet with H.H. the 14th Dalai Lama in 1959, Kungo-la served as a high-ranking minister in Old Tibet’s parliament. His teacher after 1959 was Kungo Tak Lama, the Dalai Lama’s main advisor at that time. He went with His Holiness to Dharamsala to help establish Tibetans in exile and to work in His Holiness’ office. Progressive changes were made in the exiled government’s structure to include a younger generation of ministers. Kungo-la gave exceptional service to every community and monastery in which he resided, as well as caring for small Tibetan children through establishing a daycare school.

In approximately 1980, Tulku Urgyen Rinpoche began building Ka-Nying Shedrub Ling, a monastery in Boudhanath. Tulku Urgyen asked Kungo-la to come to Nepal to help establish the monastery, and he became the monastery manager, as well as the main teacher for young monks for 13 years. He assisted Tulku Urgyen in giving many empowerments. He then completed two 3-year retreats, the first at Ka-Nying Shedrub Ling, the second near Swayambhunath, during which time he came to be regarded as a great practitioner.
Posted by Erik Pema Kunsang at 9/23/2009 1 comment: 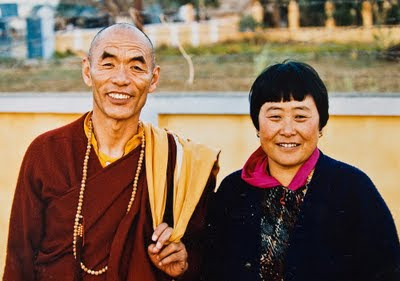 Khen Rinpoche's biography on Rigpa News.
Nyoshul Khenpo was such a consummate master of Dzogpachenpo, and such an authority on the teachings of Longchenpa, that his disciples regarded him as Longchenpa in person. He was the teacher of many of the younger generation of lamas, as well as a number of western Buddhist teachers.
Posted by Erik Pema Kunsang at 9/15/2009 1 comment: