This is the great master Shakya Shri, who was the root guru of Tulku Urgyen's Uncle Tersey. A full chapter is dedicated to this incredible yogi in Blazing Splendor. Here are the opening lines to give you a taste:

During his stay in Central Tibet, Uncle Tersey frequented the encampment of his root guru Shakya Shri, the great siddha-master. Shakya Shri was also known as the Lord of Siddhas and as Precious Realised Master. His main guru was Old Khyentse.
"Shakya Shri lived with about seven hundred disciples in Kyipuk," Uncle Tersey told me. "His disciples had dug caves all around the two surrounding slopes, while others stayed in tiny tents made of either canvas or yak felt. Shakya Shri himself lived on a meadow in the only house around, which was a simple structure of stamped mud with one large window."

A fine translation of Shakya Shri's biography together with some of his teachings and poems has been made by Elio Guarisco and we look forward to its eventual publication.

A Path Strewn with Flowers and Bones 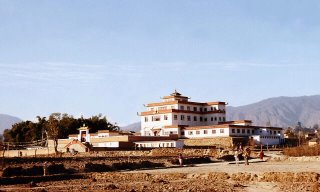 was still a city of quiet dirt roads, candle power, and open spaces in those days. The "modern" world had only started to intrude. One had to travel down to the central telegraph office to send a telegram, to the central post office or the American Express office to send or receive mail. Tulku Urgyen's new monastery, Ka Nying She Drub Ling, stood virtually alone outside the circle of buildings surrounding the Boudhanath stupa itself. [photo] A mimeographed sheet posted in the Bir Restaurant announced the first-ever seminar for foreigners to be offered in the monastery by Tulku Urgyen's eldest son, the abbott, Chokyi Nyima Rinpoche. I decided to attend.

The first day, Rinpoche spent several hours devilishly challenging the trekker, hippy and expatriate attendees to prove whether or not the table in front of him really existed. I was enthralled by his wakeful, playful manner and humor, and his impeccable logic. It was deconstruction on the fly, before I had ever heard that term or it became in vogue. I went back every day I could, and again on Saturdays.

While I grew more and more keenly interested in Buddhist philosophy, and was touched by the devout spirit of the many Tibetans around me, I held firm to the notion that I was a free agent, an independent operator. I didn't want to join any guild or identify with any group. I scoffed when Chad Leech asked me whether I planned to take refuge. Why become a Buddhist? What were the perks and benefits? I could meditate without a membership card.

At the conclusion of Chokyi Nyima's seminar, the student group was to travel up to Nagi Gompa, a small speck visible far up the northernmost slope of the Kathmandu Valley, for a special instruction from Tulku Urgyen himself, whom CN referred to variously as "the boss" and "head office." CN also offered the opportunity and arranged for me to stay on for a while at Nagi after the teaching, for a private meditation retreat.

It was a rough hike indeed up to Nagi in those days, the last part a traverse up steep dirt trails. I watched Chokling Rinpoche, CN's younger brother, and a little portly, huff and puff his way up, with some generous support from below on his backside. The gompa (monastery) itself was just a small chapel in the middle of a clearing, without much light. After we had been sitting a while, Tulku Urgyen entered the shrine hall in response to the soulful, lilting chants of the resident nuns. He taught us to understand and perceive the nature of our minds, basing his remarks on the famous verse from the Buddhist canon:

Abstain from all harmful actions,

Thoroughly train your own mind.

After the teaching, an endless stream of local pilgrims appeared from over the lip of the clearing to line up for a blessing from Tulku Urgyen, dressed in their finest holiday dresses and slacks. Before anyone in had telephones, everyone still knew where to be, and when.

Eventually, locals and foreigners alike began the trek home, back down into the valley, and I rolled my sleeping bag out onto the low bench in the back of the shrine hall on which the junior-most nuns sat during communal prayers, lit a candle, sat down, and began to practice as I had learned in my Insight meditation retreats.

After some days of "walking, walking," "breathing, breathing," and "thinking, thinking," and many hours gazing out from my perch on the flat ledge of a big cement ring girding the lone tree on the edge of the clearing, watching clouds unfurl over the valley, watching the simple herder cluck and chase after the few milk buffalo that served the gompa, the green shafts of barley wave in the breeze, I received, courtesy of a peculiar old Dutch woman who manifested in the shrine hall one day, a summons: "Tulku Urgyen says he will see you now."

"Please thank Tulku Urgyen for the offer, but I see no need to bother him. I have nothing to ask him, and am content to continue with my practice and retreat." Surprised by my answer, she beat a hasty retreat. The next day she appeared again, this time with more resolve. "You are to come see Tulku Urgyen now, you don't know what an unusual privilege it is to receive such an invitation." I demurred again, just barely.

The next day was the last of my scheduled stay. This time, there was no avoiding the call. Besides, what harm could there be in thanking Tulku Urgyen in person for allowing me to squat for ten days in the shrine, and take meals from his pair of young nun-chefs in a tiny back room, where they sniffed and wiped away tears as smoke billowed from the clay hearth stuffed with burning odds and ends of wood and yak dung?

I walked up the rickety, narrow staircase. The door opened before me. There across the room sat Tulku Urgyen in his meditation box next to a large picture window, waist wrapped in a simple blanket, more composed than I had ever thought it possible for anyone to be. He looked at me through his large glasses. I entered. I hardly noticed his student and translator, Erik Schmidt, sitting quietly by his side. "Do you have something to ask me?" Our eyes met, then I watched myself bow helplessly with uncontrived respect, struck to my very marrow by his presence, his calm, his mind enveloping the entire space and dissolving every last concept of self-importance I had carried into the room but a moment before.

With tears welling in my eyes and a slight tremor in my voice, I responded, "Yes, I wish to ask you to grant me the vows of refuge." We went through the ceremony together; Erik had to ask thrice whether the name was correct, verb and all -- Protected by the Three Jewels. Tulku Urgyen gave me ten rupees with a command to spend it all on my walk down the mountain, before I reached Boudhanath.

It was November 1981. My life had just completely changed. That old man in a blanket was the most genuine person I had ever met, by several orders of magnitude. I knew this the way I knew, one day earlier that spring as we returned from a Baha'i prayer meeting we had attended for our anthropology class, that I had fallen in love with Andrea Kozol -- only more so. Traipsing down the slopes with that ten rupee note burning a hole in my pocket, I was light as air, immensely glad to have made such a connection with Tulku Urgyen. I wanted to know what it was like to be him, wanted to be inside his mind, to learn everything he could possibly teach me. I cried thinking about what had just transpired, and vowed to follow every last word of advice he offered me.

The Great Dakini of Tsurphu 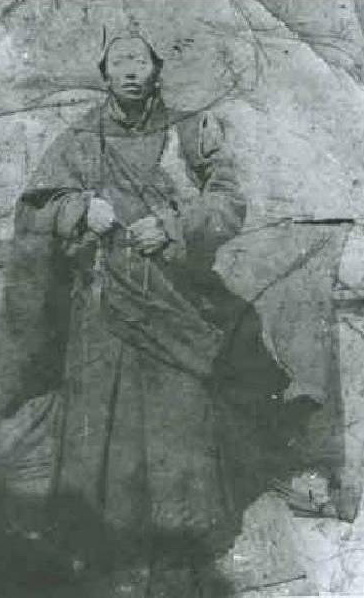 This is a picture of the 15th Karmapa's consort, who was known as The Great Dakini of Tsurphu. Tulku Urgyen was greatly impressed by her and also taught her reincarnation Khandro Rinpoche who is the daughter of Minling Trichen who is the head of the Nyingma school. Khandro Rinpoche is also an amazing teacher, and having been raised and educated in India she teaches in English. You can read more about her, as well as check out her teaching schedule at her website.
Posted by pensum at 2/05/2006 5 comments: