Buddhism and the Environment

Among his many activities, Gyalwang Karmapa has taken a great interest in environmental issues and to this end has published a booklet on Environmental Guidelines for Karma Kagyu Buddhist Monasteries, Centers and Communities which is a fine little treatise well worth checking out, if only to see samples of his paintings (found on pages 6, 10, 13 and 19).
Download (PDF 3.1 Mb)
More information at the official website of Gyalwang Karmapa Ogyen Trinley Dorje.
Posted by pensum at 2/18/2009 15 comments: 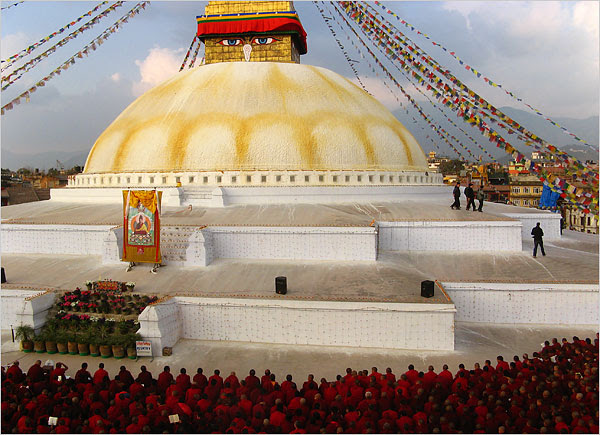 [NYTimes] AS dusk rolls in from the distant Himalayas, I nervously dart into the chaos of vehicles roaring up and down Boudha Tusal, my eyes fixed on the ornately carved stone gateway across the boulevard.

Dodging a swarm of buzzing mopeds, I duck past a taxi blasting subcontinental pop music and scoot across the path of a truck whose cab is painted with images of the long-haired Shiva and the elephant-headed Ganesh, Nepal’s ubiquitous Hindu gods. The haze of exhaust fumes rivals any Scottish mist. Traffic cops shout in Nepali as I jump onto the curb and speed between the two stone snow lions guarding the tall arch.

Suddenly, as if I have entered another world, the toxic fog dissipates and gives way to the sweet odor of burning juniper incense. Vanished, too, are Shiva, Ganesh and their Hindu brethren. Instead, the enormous disembodied eyes of the avatar of a different faith — Shakyamuni, better known as the Buddha, peer down from a soaring multitiered stupa, or temple. The Nepali pop songs fade, replaced by chanting .

“Om mani padme hum,” comes the ancient six-syllable refrain, repeated by groups of Tibetan monks in oxblood robes. “Hail to the jewel in the lotus.” (read full article)
Posted by pensum at 2/11/2009 No comments:

Over on his website Alex Berzin has posted an article on jinlab, which is typically translated as blessings, that i think is well worth reading. I for one look forward to hearing Erik's thoughts on it.
Posted by pensum at 2/08/2009 3 comments: