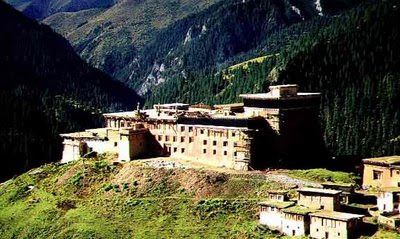 It had been the plan of the translators to include the more dense information on the transmission lineages, which didn't make it into the final version, some "other place". This blog seems to be the most appropriate place. So I and Michael will be begin to post some of the missing pieces here.
In this piece Tulku Urgyen tells about how Samten Gyatso, his main guru, passed on the New Treasures of Chokgyur Lingpa to various other masters.

It is thanks to Samten Gyatso that the Chokling Tersar was spread far and wide, because neither Tsikey Chokling nor Uncle Tersey ever transmitted it in full. Of that generation only Neten Chokling did so, but only once. That is why Tsewang Norbu pointed them out at Riwoche.

Basically, the transmission of the Chokling Tersar that all the great lamas of those days received came through Samten Gyatso. He gave the Chokling Tersar three times in Central Tibet. Many great lamas received the transmission then, including the omniscient 15th Karmapa, the great Drukchen, Taklung Tsetrul and the three masters with the title Jamgön who resided at Jang Taklung. Later on, he went back to Kham and at the request of Nangchen Tsoknyi, the guru of the king of Nangchen, Samten Gyatso offered the complete Chokling Tersar transmission at Nangchen Tsechu Monastery. At Namgyal Tse monastery in Surmang, at the sponsorship and request of Surmang Tentrul, many lamas received the Tersar transmission, including Tentrul himself, Surmang Garwang, Dzigar Kongtrul and others; all together there were eighteen major masters among the gathering of 300 lamas. After this, Samten Gyatso proceeded to Derge where he offered the great Situ parts of the Tersar, including the Tukdrub cycle. At another point, when the son of the 15th Karmapa, the reincarnation of the great Kongtrul, visited the seat of Chokgyur Lingpa, Samten Gyatso gave him several transmissions, most notably the empowerment for Tukdrub Barchey Kunsel. These were the major transmissions Samten Gyatso gave, but, of course, he bestowed empowerments upon an untold number of lesser known lamas and practitioners.

At one time, Samten Gyatso was invited to Palpung Monastery, one of the chief monasteries in the Derge kingdom, which was headed by Situ Wangchok Gyalpo, the predecessor of the present-day Situ Rinpoche. He transmitted part of the Chokling Tersar to Situ Wangchok Gyalpo and was therefore counted as one of Situ’s gurus.

Dzongsar Khyentse, the reincarnation of the great Khyentse, came to Samten Gyatso’s mountain top hermitage of Dzong-go Ling. There Dzongsar Khyentse requested the transmission of the sections of the Chokling Tersar composed by the 15th Karmapa, Khakyab Dorje, which he had not received. 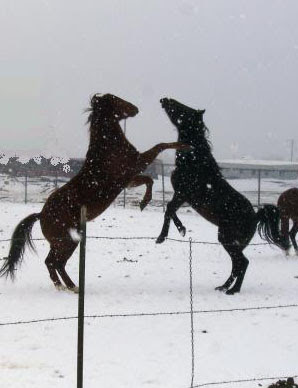 Something very unusual just happened at Gomde retreat center in Denmark. Two of the free-roaming horses were seen in an hour long elaborate dance. "I couldn't believe my own eyes," exclaimed Vetenarian Hans Jorgensen, who owns the neighboring farm and is also a dance teacher. "It looked exactly like the steps in Argentinian tango, but with a few sexy refinements. And they didn't learn it from me. Perhaps there's something about that past-life you Buddhist ha've been talking about."
Posted by Erik Pema Kunsang at 4/01/2009 5 comments: