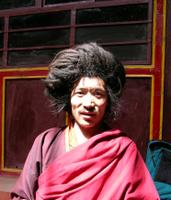 Many of the stories in Blazing Splendor mention the tokden style of meditator in Nangchen. Often they are monks who during long retreats never cut their hair, and then continued to leave it uncut -- perhaps a sign of naturalness. These days, the tradition remains unbroken. Here is one tokden I just had to take a photo of in 2003, and he didn't mind. In Nepal and India, the monks and nuns cut their longs braids after the three-year retreats, as in the retreat centers Tulku Urgyen established at Nagi and Asura.
Posted by Erik Pema Kunsang at 9/07/2005

These Tokdens are so inspiring and it is a real joy to know that their style of full time retreat practice is still being accomplished today. Has anyone heard of or seen any westerners that have taken on this Tokden lifestyle of practice?

Hi Paul,
I havn't seen any yet. Most Westerners chose to either cut their hair again after a three-year retreat, or keep the braid/pony-tail.
And... who knows ... mayby this will be a way to convert rastas to Vajrayana?

Don't know if this blog is still active--ran accross it while looking for something else. Enjoyed the book. The style of practice that includes yogic practices, uncut hair, and also living in the world as an ordinary family person (i.e. not a monk) is still alive and well in Tibet and Nepal. It is not well known in the West for various reasons, one of which is that the monastic establishment would like to suppress it. Many famous lamas, including Dudjom Rinpoche and Dilgo Khyentse Rinpoche practiced this way. The ordinary practitioners of this style are often called ngakpas or (more controversial if you are female) ngakmas. Google ngakpa to find out about people practicing in this style in the West.