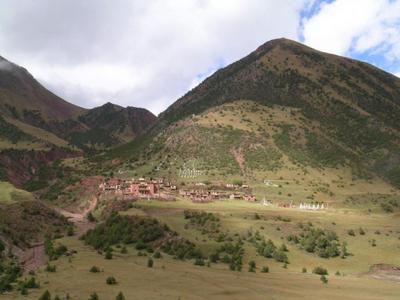 Lachab Jangchub Nordzin Choling was and still is the main monastery of Samten Gyatso and Tulku Urgyen Rinpoche in Nangchen. Even though Tulku Urgyen Rinpoche re-established his seat in Nepal, outside of Kham, the lineage of his guru and his former incarnation is still being carried on in Nanchen. Here is a short story about his former life, Chowang Tulku:

Kalpa, Chöwang’s attendant, was quite old when I met him. He had continued his meditation practice, and it seemed to me that he had reached a solid level of experience and realization. Kalpa told me many other interesting stories about Chöwang. They must be true because that old monk never lied.
Tsang-Yang Gyamtso once went up to meet Chöwang Tulku and when Kalpa went in to announce his arrival, Chöwang simply said, “He doesn’t need to see me. There’s nothing he can get from meeting me.” So, the visitor did several circumambulations and left.
Another time, a guest who had traveled quite far came with an offering he had been given to present to Chöwang Tulku—a large brick of expensive Chinese tea. Halfway to Fortress Peak this guest stopped at a river to have a meal and, as he looked at the fine tea, decided to steal half of it.
So he took out his knife and cut it in two. He wrapped one part back up in the white scarf and the rest he hid in his bag, thinking to himself, “The lama doesn’t need more than half, so I’ll just keep the rest.”
When he approached Chöwang Tulku, the guest of course didn’t mention anything about taking some of the tea. As he handed over his offering of tea, he simply said, “This is for you.”
Then he noticed that his knife, which he was especially fond of, was missing. So he said, “Hey, Rinpoche! Could you perform a divination to see if I will find my favorite knife? I lost it somewhere on the way here.”
Without a moment’s hesitation, Chöwang Tulku replied, “Don’t you remember where we divided up the tea, half for you and half for me? Go back and you will find your knife lying right there.”
Hearing this, the man was petrified and began to cry. He apologized, confessing the whole story. Weeping, he prostrated and took out the tea he had stolen.Chöwang Tulku said, “Don’t take it so hard! I don’t need that much tea. It’s fine if you take some home. Take it back there and make yourself some delicious tea. Enjoy it—and tell your family that I gave it to you.”
Posted by Erik Pema Kunsang at 9/25/2005

Pretty cool blog! If you're interested, check out my site about selling your script.