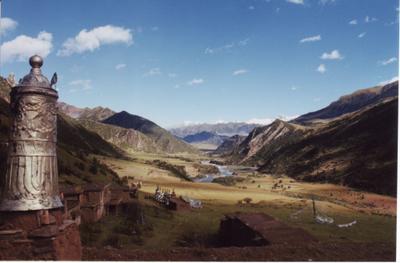 This picture was taken from the roof of Lachab monastery, the seat of the Ngaktrin tulkus and the young Tulku Urgyen Rinpoche, before leaving his homeland and establishing Ka-Nying Shedrub Ling in Nepal. This far-away little Gompa is located in Nangchen, an ancient kingdom between Tibet and Derge. The present abbot Tsewang Dechen Rinpoche told me the following story:

It was founded by Ngawang Trinley, the oldest of three sons in the Tsangsar clan. He received monk ordination from the eleventh Karmapa, Yeshe Dorje (1676-1702), and as given the command to build the monastery Lachab Gompa. "It will bring great benefit to beings," the Karmapa said. Ngawang Trinley belonged mainly to the Barom Kagyu lineage, but he also practiced teachings from the Karma Kagyu and Nyingma. Barom Kagyu teachings he received from Tsangsar Rinchen Lhundrub and the Karma Kagyu teachings from the Karmapa Yeshe Dorje. Ngawang Trinley became a great lama who upheld and spread the Dharma. He was famed as being an incarnation of Gonpo Chakshipa, a wisdom protector. He died at an age above 60. The monastery he founded is named Lachab Jangchub Nordzin Choling and is situated in the Nangchen area of Kham. It lies in the nowadays Chinese province of Tso-ngon, Blue Lake, about 200 kilometers south of Nangchen Dzong.
Posted by Erik Pema Kunsang at 10/21/2005

Is the Barom Kagyu lineage still being practiced? Or has the lineage ceased?

I have pics on TUR's visit to Ipoh,Malaysia 30 over years ago.How do I send it over?

Tsewang Dechen Rinpoche, for one, is keeping alive the Barom lineage in one of his three retreat centers. And by the way, his two monasteries and one nunnery does need support. Money goes a long way in Nangchen.

The pictures of Tulku Urgyen Rinpoche's visit to Ipoh over 30 years ago I will gratefully receive at rangjung@gmail.com
Thank you so much! And I will post the best ones here.

please send to me as well, i am appreciated. i am collecting old Urgyen Tulku's old photo when he was in Malaysia and trying to interview his old students or people who know about when he came to Malaysia in late 1970's.i am planning to make a memoirs about him in Malaysia .Any good suggestion are very wellcome.

this is my email address:ray_tht79@yahoo.com

What is it in the left corner of the picture of Nangche monastery? Is it a prayer wheel? I'm curious..Thank you so much!

It is the traditional, gilded, banner of victory. Very old-fashion, very dignified. Most monasteries have them on the roofs.

last 2 years ago, there were 2 lama from Lhachab gompa come to our ka-nying center at KL, lama Tashi and dorje loppon lama Orgyen for fund raising....

Yes, very nice people. I helped translate the recommendation letters from Chokyi Nyima Rinpoche and I got a very good impression of them. They also brought some rare texts -- among them The Treasury of Nyingma Songs -- compiled and edited by one of Tulku Urgyen Rinpoche's teachers, Khyungtrul Kargyam from Heru Gompa, also in Nangchen.

agreed.they are very hamble,specially the Lama Urgyen, everytime i go to see them and ask some question, he always in chanting mantra or meditation...as Lama Tashi know speak mandarin well; he tanslate my doubts to Lama Urgyen. I ask Tsangsar Tulku who recently in KL with his brother Tsepak Dorje Rinpoche and 3 senior lama;he told me Ngaktrin Tulku is spending more time in Xining because of his bad health...
By the way, does any Tulku for Khyungtrul Kargyam Rinpoche now?

They're coming !!!
I'm just at a slow connection right now.

was waching, TIBET Cry Of The Snow Lion, and I saw the gilded, banner of victory,on the roofs of the monasteries, very beautiful.