Tricycle Web Exclusive: The Nunnery of the Yoginis 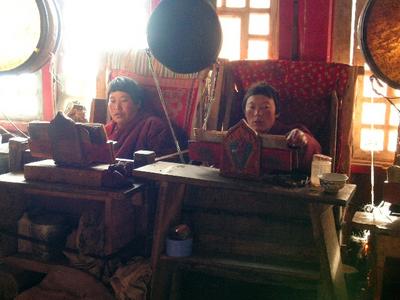 THE MEDITATING NUNS My father once brought me along when he went to teach at a huge convent, with 13 retreat centers spread across a mountainside, housing close to 500 nuns. Most days you would never see any of them, but when a great lama would stop by to give teachings, there would suddenly be a sea of crimson robes. The nuns lived in small rooms, just 12 by 12 feet, with each nun in a small box about one yard square. They would sit meditating in the box all day, and sit up practicing all night. This nunnery was one of 36, most just as large, spread across all of Tibet. The one I stayed at was just one of those. When I was older, my father returned to teach at the nunnery. I happened to be there on the day once a year in the coldest month, a night when the nuns could show their accomplishment. 200 of the nuns gathered wearing just short pants as they walked in a circle, practicing tummo all night, raising their body temperature. The nuns would be sweating while we spectators were shivering. The nuns soaked their cotton sheets in warmed water; it was so cold the sheets froze as soon as they came out of the cauldron of water. 200 of the nuns soaked their sheets that night, and then put them on and—by the heat of their own bodies—drying them out. They did this eight times in one round, dipping them into water, drying them out, and then soaking them for another round. They made rounds like this the whole night. ...People wonder why such practitioners spend year after year meditating in remote dwellings. It’s because they see chasing worldly goals as nothing more than a mirage; pursuing success and social recognition, they see, are nothing but futile, distracting us from seeking enlightenment.
--from Blazing Splendor.
Read the full excerpt online at The Buddhist review TRICYCLE's website: http://www.tricycle.com/issues/web_exclusive/923-1.html
Posted by Erik Pema Kunsang at 8/25/2005