Our Mortality: The True Foundation of Practice, an excerpt from Tulku Urgyen's Rainbow Painting 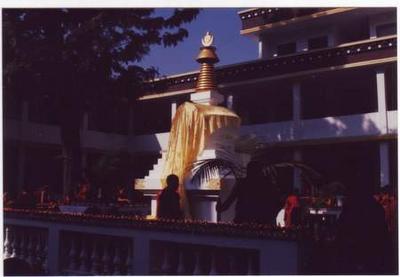 Most of the masters in Blazing Splendor are dead and gone. The Buddhist magazine Shambhala Sun recently ran an article with a reminder of our mortality.
http://www.shambhalasun.com/revolving_themes/meditation/urgyen.htm
Posted by Erik Pema Kunsang at 8/13/2005

since Tulku Urgyen was the 1st Tibetan Rinpoche who the Vajrayana in Malaysia, can you share about your exprience when the time you was with him in Malaysia and Singapore? anything happened ? people that had met? i think it must be very interesting and it may recall many old student's memory...

Yes, Sherab-Ray, there must be many stories. I wasn't there from the beginning, but here are some words of Tulku Urgyen Rinpoche that didn't get included in the book:

Now I will tell you about my first trip to Malaysia. The English monk Lodrö Thaye had been to Malaysia and while in Ipoh three Chinese fellows – the monk Reverend Tong, Wahai and Asan – discussed with Lodrö Thaye, “We have heard about these Tibetan lamas and we would like to get an important one to come here to Ipoh. Who would be best?”
Lodrö Thaye replied, “The biggest is the Dalai Lama, below him they say it is the Karmapa.”
They then agreed that Lodrö Thaye should ask the Karmapa to send a lama to Ipoh.
In those days, Lodrö Thaye was friends with a lama at Tengpoche and asked him to go visit Malaysia. Being a Nepalese citizen, travel documents were no problem. It was all settled, they both agreed, the passport was ready but then Lodrö Thaye thought, “I was actually supposed to ask the Karmapa to send someone, so I better ask him.” I didn’t have much contact with Lodrö Thaye at this time, but before he went to see the Karmapa he come up to Nagi Gompa, to ask my advice.
First Lodrö Thaye told me, “I have three suggestions to put for to His Holiness: Sabchu Rinpoche from Swayambhu, Tengpoche Tulku and you. Would you be willing to go?”
“If the Karmapa says I have to go then I will. I’m not going to go against his word,” I said. “Otherwise, I have never been abroad and have no particular desire to do so.”
“Well then, I’ll relate that to the Karmapa,” said Lodrö Thaye.
He left for Rumtek, where he had lived before. But being talkative and moving around too much the local authorities began to suspect that he was a British spy and would not let him back in to Sikkim. In his place, George MacDonald, whom we simply called Sahib, went on ahead to ask which of the three lamas the Karmapa would recommend sending to Malaysia.
Karmapa said, “Sabchu is too old, he won’t work out. Tengpoche Tulku I don’t know personally, but I do know Tulku Urgyen – he should go.” That’s what Sahib and Lodrö Thaye came back and told me.
Sahib said, “Will you do it or not?”
“I am not going against the Karmapa’s word, so I’ll go,” I replied.
Our little gang of four robed people, were the first of our type to visit Malaysia. We got donations from the faithful Chinese Buddhists. They would hand over one envelope to the four of us to share among ourselves, except when I gave an empowerment and the donation would belong to me. The trip lasted three months and I was able to accumulate a decent amount of funds to bring back with me.
During the trip Lodrö Thaye asked, “How big of a monastery are you going to build?”
“Let’s wait and see,” I said, “I’ll build in accordance with whatever I get.”
At that time we didn’t have any plan to build Ka-Nying Shedrub Ling Monastery, I was only intending to improve Nagi Gompa. Things were going well until after two and a half months, Lodrö Thaye had a plan, he had obviously carved in stone, of going to England and he insisted on seeing me on a plane back to Nepal before he would leave. In short, he cut my trip to Malaysia short. The Malaysians wanted me to stay, but to no avail. Lodrö Thaye is a willful gentleman and he got his way.
Back in Nepal, while I was conferring with Ram Lal about what to do with the funds, a letter arrived from my two sons, Chokyi Nyima and Chokling, that the 16th Karmapa had commanded them that we build a large monastery in Boudha.
-- Tulku Urgyen Rinpoche, (not included in Blazing Splendor)

so you see, the funds from Malaysia and Singapore were used to begin Ka-Nying Shedrub Ling Monastery, the monastery in Boudhanath.

i do not have the merits to meet Rinpoche when he travelled to South East Asia. i was just a small child at that time. my parents aren't (Tibetan) Buddhists. the only merit i have, is able to get hold a small fragment of Rinpoche's finger bone relic. it is now housed in a gau together with many other valuable relics, and is blessed by many Tibetan masters, His Holiness 41st Sakya Trizin, Her Eminence Jetsun Kushok, His Eminence Kyabje Dorje Chang Luding Khenchen Rinpoche, His Eminence Chogye Trichen Rinpoche and etc.

i will help you to spread the word regarding this blog... :-)