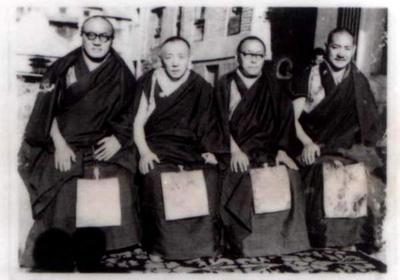 This blog serves as well as a conduit for sharing some of the old photos that didn’t make it through the final selection. And the ones we find later. Today I found this old picture of four Nangchen lamas who Tulku Urgyen Rinpoche counted among his close friends (from the left): Dabzang, Sabchu, Trarig and Andzin, Rinpoches. Dabzang Rinpoche resided at Dilyak monastery where Tulku Urgyen’s father visited on occasion. The three other lamas were brothers. They were among the first to build monasteries in the Kathmandu valley, at the two main stupas.
Posted by Erik Pema Kunsang at 8/21/2005

Of the four lamas, three belonged to the Kagyu tradition and one, Tarig Tulku, was a Sakya master of high standing. Here is a webpage with some of this details:
http://www.geocities.com/Athens/Ithaca/4886/tharig01.htm

blazing splendor friend,
thanks for visiting and sharing your work and leading me to this book. i hope to be able to order a copy soon. you read my mind, i have been on a memoir reading trip as of recent. take care and wishing you all well on the book launch events around the world!!!

Erik-la,
Dabsang Rinpoche is said to be an incarnation of Gampopa as I recall. He was in Boudhanath when I was there in '85' I guess he has passed now. One of my deep regrets is not taking a journey to meet Tulku Urgyen at that time, I did manage to meet Chokyi Nyima Rinpoche though. :-)

so many people didn't put forth the effort to see Tulku Urgyen and i'm sure many of them have regretted it!
when i first met him he was up in Swayambhu building Tsoknyi's monastery. he would usually only teach in the morning so that meant finding a taxi at 5am, then taking a very hairy and frightening ride through the fog around the ring road from Bodha to Swayambhu, then climbing the hill which seemed more like a mini-mountain at that time of the morning, of course you had to carry a stick and a few stones to fend off the dogs that tended to attack along the way. but once at the top the view was spectacular and good ol' Oser would make me a cup of tea and we'd sit and chat before Rinpoche was ready. those were special times and i was always shocked at all the people who couldn't be bother to put forth the effort. and what brings a chuckle now is that many of those who didn't bother attending any of those teachings, now call themselves disciples of Tulku Urgyen. i wonder how they will feel after reading some of the stories about practitioners in Rinpoche's memoirs? hell even i feel like a lazy ungrateful faithless lout after reading them!