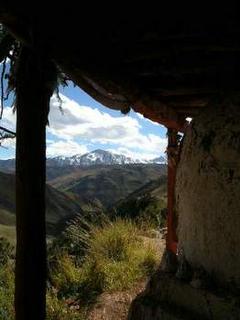 One of the more dominant figures in Blazing Splendor was Chimey Dorje, grandson of the great treasure master, a rogue turned siddha, and father to Tulku Urgyen Rinpoche. The view on this picture is from the stupa containing his remains at the distant hermitage Dechen Ling. Marcia and I reached this hermitage-nunnery after two days on horseback from Lachab through a spectacular landscape. Mac (George MacDonald had sponsored the restoration of this stupa on a previous visit. At Dechen Ling we saw one of Tulku Urgyen's female disciples who has taken the vow to stay in retreat for the rest of her life. More about Chimey Dorje on http://www.rangjung.com/authors/Chimey_Dorje.htm
Posted by Erik Pema Kunsang at 8/19/2005

Dear Marcia, dear Erik and all who have made possible this wonderful book, thank you so much !
"Blazing Splendor" by its very special storytelling way of teaching has opened up so many old and new connections in my mind.
And the most wonderful one is that my pride and jealousy have a new powerful remedy: the understanding that being proud of where you come from and belong to, really connecting to the lineages one holds has nothing to do with ego-trips but is vajra pride at its best and seems to be the path to subdue Rudra and to learn how to use Samsara as adornment. Thank you !!! Nicola