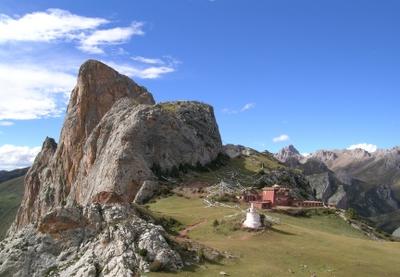 From the geographical point of view I am simply at a loss to find enough superlatives to describe the layout of this place--it is simply outrageously and fabulously amazing; nothing less. It would have been a perfect site for the Lord of the Rings. A majestic rock formation surrounded on three sides by a raging river, towering three quarters of a mile almost straight up into the sky. You had the feeling of being on the tip of a needle. On the peak are two meadows, like two terraces, and on the lower is nested a peaceful retreat center in front of which wild mountain goats take refuge in the evenings and leave the next morning. Only a narrow passage from the western side allows access. The place has been used by Buddhists for more than thousand years and before them, in prehistoric times, by Bonpo practitioners.

This mountain is regarded as the most sacred in the whole of the Nangchen kingdom--it is both the mandala of the peaceful and wrathful deities as well as that of Chakrasamvara. In recent times, it was the hermitage where Tulku Urgyen Rinpoche spent most of his former life in solitary retreat, and the location for the heart-rendering story of how his personal teacher passed away.

Because Fortress Peak had such an important position in my imagination due to all the stories I had heard from Tulku Urgyen Rinpoche and since it came up again and again Blazing Splendor, I just had to take a picture. And that was no easy task indeed!

During the week my wife and I spent there, my constant high anxiety attack lessened and with the help of two monks I ventured up on one of the smaller peaks right on the edge. Up there, half a mile down behind me, the monk holding me from right and left, I took this one photo for you.
Posted by Erik Pema Kunsang at 8/11/2005

Erik, your daredevil stunt is very much appreciated!
As it happens, when you downloaded your Nangchen pics to the Gomde Sangha Forum last year, for some reason the photo of Fortress Peak was the only one I took the liberty to save for my desktop. Even though I was most impressed and moved by the nuns in lifetime retreat.
The scenery looks so fantastic and astonishing that if I had seen it in a movie, I probably would have dismissed it as fake.
Helga

I wonder what the latitude and longitude of Fortress Peak is? It'd be fun to look at it via Keyhole/Google Earth....

We had no maps, and knew of just two other "white people" before us -- both students of Tulku Urgyen -- who had visited the place. The secrecy is extended ...

Erik, is it possible to visit Fortress Peak?

Yes, it's about half a day from Jegu. And -- with a name like yours, you should be able to visit anywhere!