Swayambhu from the air 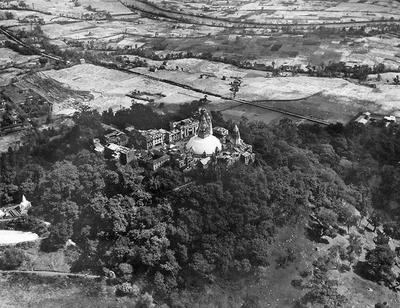 Swayambhu is, besides the Great Stupa of Boudha, one of the most spectacular monuments in the Kathmandu Valley, wrought with anscient history and legend. Also here one of the lamas from Nangchen settled down, this time Sabchu Rinpoche (number 2 from left in http://blazing-splendor.blogspot.com/2005/08/four-nangchen-lamas-have-landed-in.html).The Kagyu temple in front of the stupa had been in the care of a Nepali lama who then ventured to Tsurphu in the 1950s and signed it over to the 16th Karmapa. The picture you see here was taken in 1965 by Ganesh Man Chitrakar, whom I never got a chance to ask. So, Ganesh Man Chitrakar, thanks to you for that great picture! (Click on the picture to see it at 153kb)
Posted by Erik Pema Kunsang at 8/23/2005

Those were the days. Wish I´d been there. What a beautiful photo.

The photographer Ganesh Man Chitrakar was quite important in Nepal and is featured on http://www.nepalhomepage.com/ganeshphoto/photographers.html

Dirgha Man Chitrakar and his son Ganesh Man Chitrakar (1906-1985) were official Court Photographers for the Nepali Royal Family in the first half of the twentieth century. They captured some of the first photographic images of the Kathmandu Valley and enjoyed unparalleled access to the royal family at work and at play.
Kiran Man Chitrakar, grandson of Dirgha Man Chitrakar, has continued and modernized the family tradition, acting as official cameraman for Nepal Television during the prime ministerial visit to London in 1996. He also maintains the family collection of 3000 glass negatives, from which most of the images in this exhibition were printed, and adds modern photographs to the collection.