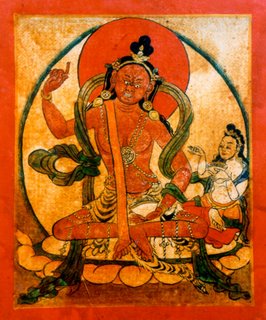 Sorry not much of interest has been happening here for the past couple of weeks but Erik has been up in retreat at Nagi Gompa. Here's a rather gorgeous picture of Shri Singha, to help tie you over until Erik returns and starts to share his photo collection with everyone once again.

Shri Singha was the chief disciple and successor of Manjushrimitra in the lineage of the Dzogchen teachings. He was born in the Chinese city of in Khotan and studied at first with the Chinese masters Hatibhala and Bhelakirti. In his Ocean of Wondrous Sayings, Guru Tashi Tobgyal adds that Shri Singha received a prophesy from Avalokiteshvara while traveling to Serling, telling him to go to the Sosaling charnel ground in order to be sure of the ultimate attainment. After many years Shri Singha met Manjushrimitra in the charnel ground of Sosaling, and remained with him for twenty-five years. Having transmitted all the oral instructions, the great master Manjushrimitra dissolved his bodily form into a mass of light. When Shri Singha cried out in despair and uttered songs of deep yearning, Manjushrimitra appeared again and bestowed him a tiny casket of precious substance. The casket contained his master's final words, a vital instruction named Gomnyam Drugpa, the Six Experiences of Meditation. Having received this transmission, Shri Singha reached ultimate confidence. In Bodhgaya he found the manuscripts of the tantras previously hidden by Manjushrimitra which he took to where he classified the Instruction Section (man ngag sde) into four parts: the outer, inner, secret, and the innermost unexcelled sections. Among Shri Singha's disciples were four outstanding masters: Jnanasutra, Vimalamitra, Padmasambhava and the Tibetan translator Vairotsana.

What are charnel grounds actually? We always hear about them in the biographies. I know there are 8 main ones.

And I've seen (through links from this blog on Blazing Splendour) the picture of the Cool Grove charnel ground. It just looks like a simple grazing ground seen from afar... (i hope this is not any kind of blasphemy, sorry for that.)

Where is the charnel ground located? Is it a sort of burial ground for example?

thanks for elucidating this concept of the charnel ground.

on the outer level charnel grounds are like burial sites, but they didn't usually bury the dead but rather cremate them, or put them up on pyres for vultures to eat or in Tibet they did sky burial which required hacking the body up into pieces which vultures and condors would then eat or carry off.

typically yogis would use charnal grounds as practice places for several reasons: 1) they could be assured a reasonable amount of privacy as regular folks generally avoided such places (2) they could reflect on impermanence and were surrounded by constant reminders of it (3) one's fear of death had to be confront quite directly and dealt with etc. even in the early Pali texts of Buddhism there are elaborate descriptions of practices to be done while watching a body decay in a charnal ground.

the photo of Cool Grove you mention was taken in recent times. and yes it does appear that it is now a pasture. but long ago it was something quite different.

Thanks a lot. I don't know many lamas. And when my Lama asks: "what would you like me to teach about?" my tiny wise-voice tells me to maintain a deep silence.. haha

But thanks, maybe with your encouragements, I might risk the question with some senior sangha member. :)

I'm not a native english speaker, so I don't quite understand why the word "charnel" is used. Would you have any explanation for me?

Thanks a lot.
MV

"Charnel" is an obsolete word really so i'm sure many people wonder what exactly it refers to. A "charnel ground" is literally a cemetery or burial place, somewhere to deposit corpses. So now you know.

As for asking questions, i encourage you to overcome your silence. often even what seems the most insignificant or mundane question can lead to interesting and important revelations. of course, one should never make a pest of oneself, but each opportunity to ask a question is precious and should not be squandered.

Most of the teachings found in the books of Tulku Urgyen Rinpoche, are the result of students asking questions. In fact, it is thanks to the intelligent questions of Marcia that much of Rinpoche's knowledge has been captured on tape and transcribed.

Also, please remember that the Buddha only ever answered questions. And since, the tradition has been to ask three times, though now most often only once will do. Buddhism unlike Christianity is not a proselytizing religion where members go out to preach and try to convert others. Rather it is closer to medicine, where one goes to a doctor, asks for help, explains what is wrong and receives the remedy specific to the individual. Similarly, one goes to a lama seeking to be cured of suffering and ignorance. If you don't tell him what's ailing you, you may never get cured!
stay healthy,
mt

I see my Lama rather when there are big assemblies. Never in private. So, it always feels awkward to ask these types of questions. I kinda fear that I'd be making him and the assembly lose some precious time, or distract the assembly...

But thank you so much for your help and explanations. :) I'm glad I found this blog. :) good day to you