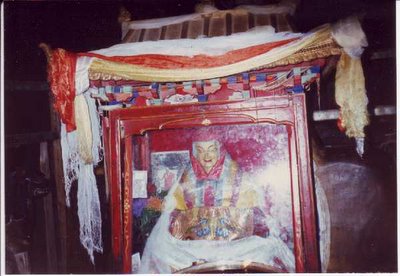 Tulku Urgyen Rinpoche often quoted Atisha, the great master of the Kadam tradition, and here are some of these precious pieces of advice, from Rainbow Painting:

Hello Erik,
Thank you for this site. I have begun to check-in regularly for teachings. I was fortunate enough to receive teachings from Urgyen Tulku in Nepal. I have much regret that I did not make better use of the opportunities that were right in front of me while I was there but regret is useless now unless of course it propels me to make better use of my time. You and I have also met - just once, I think, in Chokyi Nyima's monastery. The most importnat thing to me now, vis-a-vis practice, is to skillfully integrate into my daily life what is generated in practice. Without negativity. Generating is not a problem, integrating is. I have alot of negativity and I'm not very skillful at this. In the beginning I practiced like a wildwoman, with little or no regard for the consequences of my lack of skillfulness. Now I am more like a clumsy and fearful waiter, afraid to spill a drop. I am so upset at the thought of causing harm that i do virtually nothing. Nonetheless, I still leak negativity. Of course I maintain the continuity of awareness because I cannot do otherwise but beyond that I do not actively do practices. I would like to join with others but I am simply afraid to. That's why so much of Atisha's words resonated. I deeply miss the sangha and our beloved and kind teachers. The last time I saw Chokyi Nyima Rinpoche was in San Francisco in 1998 (you were translating). Because I was moving away the next day I was only able to come for one teaching session. I asked a question about grief. Now those opportunities to attend teachings are few and far between and I have begun to be aware that time is short. Thank you again for this site - and especially the pictures.
It was good to see the photos of Dechen Kunsang and Chatral Rinpoche and of course all the others.

this teaching is incredible!!