The pervasiveness of the Dharma in Tibet 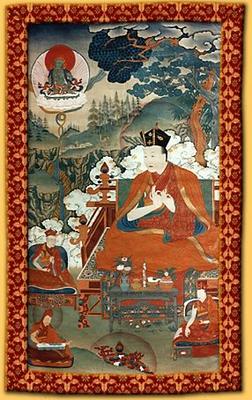 Before continuing with my tale, I want to emphasize that the Dharma was remarkably widespread throughout the snowy land of Tibet. It so permeated our society that even small children didn’t have to deliberately study prayers such as the supplication to the Lotus-Born master. They would learn how to chant it just by growing up in this Buddhist environment and hearing it over and over.
Children’s games reflected this atmosphere and we often played at building monasteries. Groups of us kids would pile up mud and stones, under my supervision, and we managed to make some small “temples” in which we would play “lama.” Sometimes these games went on from early morning until sunset.
Aside from the hermits and vast assemblage of monks and nuns living in the big monasteries, practitioners often stayed together in large encampments, such as the group surrounding Shakya Shri. For instance, the seventh Karmapa never stayed long in one place but moved from one camp to another throughout Tibet. Any offerings he received he would pass along on the spot to the local monasteries.
The seventh Karmapa’s close entourage consisted of at least one thousand monks, who followed along wherever the Karmapa went. The monks and attendants with their horses and yaks were so numerous that not everybody could fit in one place. So they staggered their movements in groups of one hundred, camping at seven or more different places a day’s travel apart, staying a day in each place.
People camped in tiny meditation tents with a single pole, just big enough to sit in. The whole monastic community would stay in such tents, though the master’s tent was typically larger. They were all required to keep the Kagyu tradition of four practice sessions a day, even while traveling. At a designated time, a bell would be rung and they would eat their meal together.
As soon as the meal was completed, according to the tradition, they would recite the Kangyur, the Buddhist canon in one hundred large volumes. As they traveled along, walking in a line across a vast plain, younger monks would distribute separate pages to each of the hundred monks, collecting the pages as they finished. All together they could easily complete all one hundred volumes by the time they reached the next mountain range, each monk reciting just two or three pages from each volume. The whole encampment was so large that, when everyone was together, the monks could recite the whole Kangyur in just an hour. The heap of their used tea leaves was often as tall as a man.
The Karmapa’s caravan was known as “the great encampment that adorns the world,” one of countless examples illustrating how deeply the Dharma was woven into our very existence.

From Blazing Splendor, the memoirs of Tulku Urgyen Rinpoche
Posted by Erik Pema Kunsang at 10/04/2005

Thats a really interesting point Tulku Urgyen Rinpoche was saying. The 8th Karmapa, Mikyo Dorje also traveled extensively for long periods with the same type of camp following him. He required the same type of schedule as well and that is how the " 8th Karmapa Guru Yoga in Four Sessions" came about. It combines the way of Naropa and Maitripa into a guru yoga practice that can fit into a busy lifestyle. It has become a widely practiced Guru Yoga among modern Karma Kagyu lay practitioners.

Allow me to paste in some more information from http://www.simhas.org/karma7.html about this 7th Karmapa who lived 1454-1505 CE:

The Seventh Karmapa Chodrag Gyamtso incarnated in Kyilha, northern Tibet. Upon his birth, Karmapa declared, “Ah! (which represents the absolute view of reality) Amala (mother), Ah hung! The entire world is emptiness.” One of the 6th Karmapa’s disciples, Cho Paljor of Nyewo Ngarteng Monastery, dreamt that the Karmapa was born in the Kyilha region.

Cho Paljor immediately found the infant who was born a week ago, precisely as he envisioned. Upon presenting Chodrag Gyamtso with the possessions of Karmapa Tongwa Donden, he correctly declared which items belonged to him. At two months old, the 7th Karmapa blessed ten thousand people in Arik Thang, where the previous Karmapa once taught.

At five years old, the Karmapa was able to end a war that was erupting in the southern Tibetan and Bhutanese region. He often had visions of Guru Rinpoche and, during times of war, acted to bring people to secret caves and valleys for protection. At eight, the Karmapa received further instructions from Bengar Jampal Zangpo and Gyaltsab Rinpoche.

His Holiness traveled widely for about half of his life. He composed numerous commentaries, constructed bridges, founded the monastic college at Tsurphu, restored the main statue created by Karma Pakshi and taught many students.

He was especially renowned for teaching about Chenrezi, the Bodhisattva of Compassion, and the Mani Mantra. His disciples were taught to strictly follow his instructions on meditation and discipline.

For the other half of his life, the Karmapa was mainly in retreat. He also sent gold and other items to aid in gilding the Buddha statue in Bodh Gaya, India. The 7th Karmapa’s successor was Drubchen Tashi Paljor, the 1st Sangye Nyenpa Rinpoche.