Early picture of Tulku Urgyen Rinpoche in the Ipoh Cave 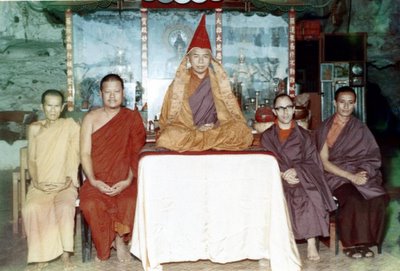 Earlier in this weblog it was brought up that Tulku Urgyen Rinpoche may have been the first Tibetan Lama to visit Southeast Asia. At that time I asked for some photos and Anne sent this and two other photos. The large Chinese monk to Rinpoche's right is Khoo Poh Kong, and to his left is the British monk Lodro Thaye.

Dear Erik,
Valerie said...
Hi,
I met you all at the Bunch of Grapes bookstore on Martha's vinyard this past September. I was very impressed with your presentation as well as the talk by your wife and the talks by the Golemans. Because of your presentation I am attending the mind and life meeting in washington, dc in November. Please let me know if any of you will be there. You gave me your email but I misplaced it.
Valerie
vbd26@yahoo.com

nice photo Anne! Does any thing that u still remember at that time?