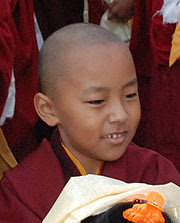 We are delighted to report that at 3:45pm, Saturday, November 21, 2009, Tulku Urgyen Yangsi Rinpoche arrived at Kathmandu’s Tribuvan Airport aboard an Indian Airlines flight direct from Delhi. Accompanied by his parents, Neten Chokling Rinpoche and Khandro Tendzin Chöyang Gyari, Yangsi Rinpoche was escorted to Nepal by Tsoknyi Rinpoche, Namdol Gyatso Lama and two attendants. So much joy and excitement was in the air! The afternoon was very reminiscent of Yangsi Rinpoche’s arrival at Tribuvan Airport in November 2008 when he landed in Nepal for the first time for the special occasion of his formal enthronement at Ka-Nying Shedrub Ling Monastery.

At the airport, more than 30 lamas, nuns and laypeople made up the joyful welcoming party — including Tsikey Chokling Rinpoche and Phakchok Rinpoche, with their respective wives and families, as well as Chökyi Nyima Rinpoche. Tsoknyi Rinpoche’s wife and his mother were also present, as was Tenpa Yarphel and Tenpa’s son, Tashi. Ani Maya, head nun at Nagi Gompa and Tulku Urgyen Rinpoche’s close personal attendant for several decades, was also present to welcome Yangsi Rinpoche.

Just as he had done at the airport one year ago, Yangsi Rinpoche serenely and graciously accepted a kata (white scarf) from each person who had come to greet him. Smiling, he touched his forehead to theirs. Seeing this special child, a Nepali passerby in the crowd immediately stopped and bowed before him; Yangsi quickly responded by warmly touching his forehead to this fellow’s forehead, too.

More details on www.shedrub.org
and video

I have a question to you.
Need your help very much. I live in Taiwan. My name is Jesse.
The book about Advice from the lotus-born