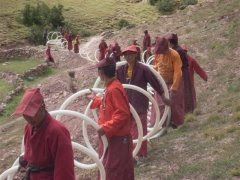 The Ted Worcester/Yangdzom Healing Hands project sponsors medical training, clinics and supplies in remote areas of Eastern Tibet. This year, due to problems in obtaining Chinese visas because of tensions associated with the Olympics, the medical and support team was unable to visit the region, or hold a scheduled three-month training in Western medicine. The program, which will train two workers from each monastery/nunnery in basic medical care, is now slated for 2009, with support from the Bridge Fund. Yangdzom is continuing to send money for medicines as well as support for the elderly poor through The Bridge Fund.
In 2009 we look forward to building another clinic at Neten Monastery with support from The Bridge Fund. This will be our fourth fully funded clinic. Three more are planned, as well as an expansion of the existing clinic at Cha Chik. Yangdzom's medical and support team will travel to Nangchen next year to oversee activities.
Yangdzom's biggest achievement in 2008 was facilitating a water supply for Dechen Ling Nunnery with the help of Jinba, a Tibetan NGO run by Tashi Tsering. The water project implemented the longest pipe in Qinghai Province. It is a great joy to help these 300 special yoginis to acquire a most basic need. Previously they relied on a single small spring that froze solid in winter. Dechen Ling was the residence of Tulku Urgyen's father, Chimey Dorje; Tulku Urgyen himself lived there for a time as a boy.

Yangdzom is run under the umbrella of Rangjung Yeshe Gomde USA.
Posted by Erik Pema Kunsang at 11/17/2008