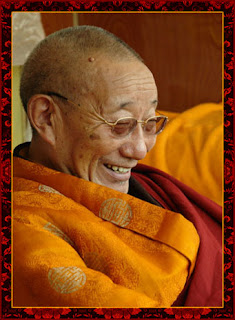 Sadly the great Drukpa Kagyu master and abbot of Tsechu Monastery Adeu Rinpoche passed away in Tibet on the morning of 27 July, 2007.
Posted by pensum at 7/28/2007

This great teacher of my teacher will be sorely missed by all who knew him; the great compassion with which he conducted all of his relationships stands as a testament to the way of Dharma...may we learn to be infused with bodhicitta in all aspects of our lives, and may the strength and fearlessness of the dharmic way guide us all to be of great benefit to all

and may the westerns learn how to translate... yesterday i heard that in bruxelles they say nurse and think that they nun. Can you belive that?!
it´s why they don´t have "mind techings".
hello rinpoche and good bye.

Well Conceição there are many translators, with varying abilities and not everyone is so fortunate as to attend teachings translated by such skillful people as Erik, Richard Barron or the like, yet though lacking certain language skills the compassion, diligence and devotion displayed by their example in serving their lama is a much more valuable lesson than the word for "nun" or "nurse," especially for us cold-hearted intellectuals in the West.

That said however, it is wonderful that people are able to make any connection to the teachings, and that alone makes this precious human life that much more precious. Also one´s faith and devotion can provide a far greater opportunity for realizing the essence of the mind teachings--as it is said, "In the moment of love, empty awareness dawns nakedly."

obrigado [thank you] for the teaching ----like Chatral Rinpoche said - "Above all, what do we need is to develop bodhicitta."

ps. i don´t have a cold-hearted

Here are some photos of Tsechu Monastery in Nangchen where the precious Adeu Rinpoche lived.

and an interview with him condusted by Erric Solomon from Rigpa:

Are there any published teachings by this Adeu Rinpoche. He seems wonderful and I would love to read what he said.

Yes there are. Chapter 28 in Quintessential Dzogchen (Rangjung Yeshe) is an excellent explanation of the similarities and differences between Mahamudra and Dzogchen. Also the forthcoming book on Tara practice entitled Skillful Grace contains extensive teachings by both Tulku Urgyen and Adeu Rinpoche.

Hallo Pensum.
How can these masters give teachings when they are both dead.... couldnt they change their meaning over time.
Thank you for your answer.

There is also a wonderful teaching on guru devotion in the book Dzogchen Essentials: The Path That Clarifies Confusion in which Adeu Rinpoche defines a capable spiritual guide, placing the responsibility of validation squarely on the student's shoulders. He also mentions the seriousness of this relationship and the immense advantage what may ensue from serving a master in the true way--assimilating the guru’s state of realization, and the connection between devotion and discovering the awakened state in oneself. Reading through it again, I feel deeply saddened that we have lost one more of the world's antique and true masters.

Andrea, very interesting question you ask: might Adeu Rinpoche or Tulku Urgyen have changed their teaching over time if they still lived?

As i see it, and i want to stress these are merely my own personal thoughts, the buddhadharma (teachings of the Buddha) deals with things as they are and the essential nature of experience, hence the basic realization is the same throughout all times and no matter who realizes or experiences it. What does change however is the expression of this realization, depending upon language, cultural background, personal history, those being taught etc.

As a lama's realization deepens and their teaching skills are honed over the years it is true that their teaching style also may change over time. Personally this is one of the things that attracted me to older, more mature lamas with many years of practice and retreat under their belts.

Further lamas like Adeu Rinpoche and Tulku Urgyen taught according to the situation and understanding of their audience. Two people could ask the very same question and yet receive very different replies, one may be long and detailed, while the other short and pithy. Which leads me to re-affirm the importance of receiving teachings from a qualified master in person, clarifying one's doubts and clearing away one's confusion.

We are very fortunate to have a wealth of transcripts, books etc. by numerous great lamas like Tulku Urgyen, Dilgo Khyentse, Thrangu Rinpoche and many others, and we can gain immensely by studying them; yet in my personal experience i have found that an entire library could never replace a mere five minutes spent clarifying one's own practice and understanding with a lama of Adeu Rinpoche or Tulku Urgyen's calibre.

The Dzogchen and Mahamudra teachings are not mere intellectual theories but a total engagement with and questioning of one's life and experience, right down to the very root of the self or lack thereof. The words merely provide direction, like signposts along the highway, while each of us individually must put forth the effort to actually walk the road putting one foot before the other.

There is a sweet song by a Khampa devotee and some very nice footage of Adeu Rinpoche on Youtube:

Adeu Rinpoche is also known as Trulshik Rinpoche, currently holding the various positions in the prominent local associations, such as Committee Member of Qinghai Buddhist Society, Chairman of the Yushu Buddhist Society and the Deputy Chairman of the Yushu State Governmental Association. Rinpoche plays an active role in promoting the unity of the country and of the local Tibetan people.

The current eighth Adeu Rinpoche was born on the 4th day of the Tibetan 12th month in the fifteen cycle of Iron Horse year, in the middle of a freezing winter. However his birth miraculously transformed his birthplace into a magnificent land where flowers bloomed, thunders roared and rainbows appeared. And all the water in his house was mysteriously turned into milk. As the sixteenth Karmapa and the eighth Choegon Rinpoche recognized the child as the authentic reincarnation of the seventh Adeu Rinpoche, he was taken to Tshechu Monastery for enthronement at the age of seven. Right after this, he began his traditional education in writing, calligraphy, poetry, astrology, mandala painting, spiritual practice and text recitation. At the same time, the young Adeu Rinpoche also received many teachings, Tantra and oral pith-instructions based on the old and new traditions but primarily on the Drukpa lineage from the eighth Choegon Rinpoche, Jamyang Khyentse Rinpoche and many other great masters. Right after this, Rinpoche entered into a seven-year retreat, when he carried out many spiritual practices based on different deities and on the skilful trainings of the prana and bindu, such as the Six Yogas of Naropa and the liberating Mahamudra mind-training practices. He was also learning philosophy. Adeu Rinpoche later wrote a precise commentary on the three groups of precepts, the root of heart-essence of Nyingmapa lineage, and on the various mandala deities.

In 1958, all the sacred texts, statues and precious objects were completely destroyed, and Rinpoche was imprisoned for fifteen years. Although Adeu Rinpoche suffered a great deal, the period in prison gave him an opportunity to meet many accomplished masters who were also trapped in the prison. Through these masters, he received instructions on Dzogchen (the Great Perfection), and under their guidance, he practiced rare and precious listening lineage (Nyengyud) of the Nyingmapa school, and studied the various Nyingmapa terma teachings.

At the end of 1980, Adeu Rinpoche went to Tashi Jong in India to pass on the entire lineage of the Khampa Drukpa tradition to the present Khamtrul Rinpoche Shedrub Nyima, Choegon Rinpoche Chokyi Sengye and many other great reincarnate masters of the Drukpa lineage.

At present, Adeu Rinpoche has undertaken the responsibility to restore Tshechu Monastery, and at the same time to collect, correct and edit all the Drukpa teachings, Tantras and practices. Once this colossal project is completed, Adeu Rinpoche will print these in the traditional format and distribute them to all the Drukpa monasteries, for the benefit of the current and future practitioners and to prevent the loss of the teachings of the glorious Drukpa lineage.