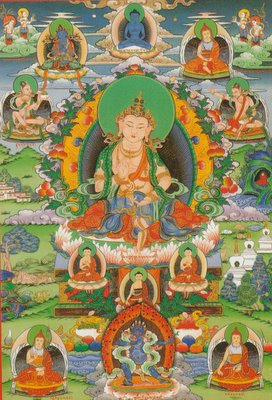 The main teaching of the original teacher Buddha Samantabhadra is Dzogchen, the Great Perfection. The teachings of Dzogchen are the pinnacle of all nine vehicles. Before the Dzogchen teachings arrived in our human world, they were propagated through the Gyalwa Gong-gyü, the mind transmission of the victorious ones, in the three divine realms: first in Akanishtha, then in Tushita, and lastly in the Realm of the 33 Gods, the world of Indra and his 32 vassal kings located on the summit of Mount Sumeru.
Generally, it is said that the 6,400,000 Dzogchen teachings entered this world via Garab Dorje, the first human vidyadhara, who directly received the transmission from the Buddha in the form of Vajrasattva. These teachings first arrived in Uddiyana, and later were propagated in India and Tibet. Before the era of Buddha Shakyamuni the Dzogchen teachings were propagated in our part of the universe by other buddhas known as the Twelve Dzogchen Teachers. Buddha Shakyamuni is usually counted as the fourth guide in this Excellent Aeon in which one thousand fully enlightened buddhas are to appear in our world. Although in this context he is known as the fourth guide, Shakyamuni is the twelfth in the line of Dzogchen teachers.
No Dzogchen teachings have occurred apart from the appearance of a buddha in this world, so we must count Buddha Shakyamuni as one of the chief teachers through whom the teachings were transmitted. He did, indeed, convey Dzogchen teachings, though not in the conventional manner. His conventional teachings were primarily received by those who had a karmic connection with the teachings appropriate to shravakas, pratyekabuddhas and bodhisattvas. It was not that they were not allowed to receive the Dzogchen teachings; their karmic fortune was such that they received the teachings to which they were suited. The Buddha gave Dzogchen teachings, as well as other Vajrayana instructions, by first manifesting the mandala of a deity and then imparting the tantric teachings to a retinue seated within that setting. This, however, does not lie within the scope of what was perceived by ordinary people.
--Tulku Urgyen Rinpoche

The Tangkha is depicting Youth of Inconceivable Sublime Light (khye’u snang dam pa bsam gyis mi khyab pa) one of the first of these Twelve Dzogchen Buddhas. Shakyamuni is the Twelfth. The painting was supervised by Nyoshul Khen Rinpoche shortly before his passing.
Posted by Erik Pema Kunsang at 1/17/2006

I keyed in that website but was not able to progress much further -who is the lama pictured on the website? I have seen him before but don't remember where and what his name is. Can you fill me in?

Has Nyoshul Khenpo been reborn?

Hello,
I just received my copy of Blazing Splendor this weekend and have begun reading it. The difference between being born in a culture which understands and supports Dharma pratice and one that does not is amazing. How to understand all that is presented and make sense of it? We are living in such uncertain times - may the Dharma help us all no matter what culture we were born into and may we all have patience and understanding with each other and understand that no one has a monopoly on wisdom - we all need to help and understand each other. Urgyen Tulku was truly an amazing and accomplished yogi whose simplicity and kindness were unsurpassed. I only encountered him three times but feel quite fortunate to have been able to do even that. May his sons and grandsons have long lives and may their Dharma practices bring much fruit without obstacles. May their meetings with the western world help to unravel and untangle the confusions and dangers in our world. May kindness and compassion be extended to all, regardless of their religious persusions and apparent differences. May no one forget that deep in their hearts every being alive has the same aspiration for happiness and relief from suffering.

Thank you very much for presenting this material even if so much of it is foreign and not understandable to this westerner. There is so much work to be done to help our world. The problems are enormous. May we all renew our effort to achieve true understanding between peoples, not clinging to our stubborn views, and not resting until our negativities are dissolved. May the space of boundless compassion truly extend over and through all the peoples of the world so that no one ever feels threatened and all understand that no one means them harm. May our fears dissolve. May our kindnesses expand.

Thank you also for providing this opportunity (this blog) to say something here. Even after reading just a little bit I was moved to say something. May we all have the courage to express what is in our inner most hearts.

thank you so much for your kind and inspiring words. we put great effort into creating a book true to Tulku Urgyen's wishes and aspirations, in fact we were rather uncompromising in this regard and as much as we wanted to provide a readable and enjoyable book for Westerners. it was a long and arduous, but extremely rewarding journey seeing this book through to the end and such response as yours makes it all worthwhile.

May our fears dissolve. May our kindnesses expand.

Hi Friends
I write this for a ask. Can you put here, in the blog, a image of the Bomtha Khenpo, i want to print this image. Bomtha Khenpo Khenpo Dorje) is one of the root teachers of my root Guru Chagdud Tulku Rinpoche. I only have a picture in the book "Blazing...", but is so small to copy and put in the shrine.
Sorry for my brazilian english. Thank You and Congratulations for this beatifull book and weblog.

Hi Marcelo,
i love the section about Bomtha Khenpo and can understand why you would want to put a picture of him on your shrine. let me see if i can dig up a file with the image for you. please check back in the coming days to see if i was successful, if not i'm sure Erik will be happy to oblige when he comes out of retreat.
best,
mt

Michael
Thank you very much for your attencion.