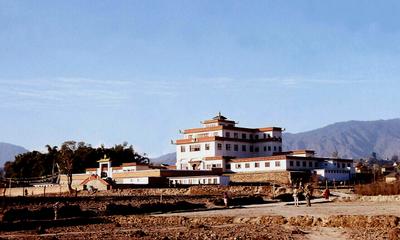 Many of you have been to Boudha and visited the Great Stupa and taken a round of the various monasteries. But where did the lamas come from and how were those monasteries first build? Some of them have fascinating stories behind them.

Some fifty ago (in the mid-1950’s), the 16th Gyalwang Karmapa, Rangjung Rigpey Dorje, gave a command and prophecy to one of his principal gurus, Tulku Urgyen Rinpoche, Dharma Master of Lachab Gompa in Kham: "If you go to Nepal and build a monastery, it will further the Buddhist Doctrine and bring benefit to sentient beings.” In accordance with Karmapa's wish, Tulku Urgyen Rinpoche left his monastery in eastern Tibet and crossed over the Himalayan Mountains into neighboring Nepal where he journeyed in its northern regions. Shortly thereafter, Karmapa placed Tulku Urgyen Rinpoche in charge of Nagi Gompa, a nunnery situated high on the northern slopes of Kathmandu Valley. After settling there, he quickly expanded the nunnery to include a main temple and simple dwellings for about 80 nuns. Early in 1972, Tulku Chokyi Nyima Rinpoche and Chokling Rinpoche joined their parents, Tulku Urgyen Rinpoche and his consort, Kunsang Dechen, in Kathmandu. Until that time, the brothers had been studying since childhood at Rumtek Monastery, seat of His Holiness Karmapa, in Sikkim. Within a short time, Tulku Urgyen Rinpoche and his family began construction of Ka-Nying Shedrub Ling Monastery on spacious farmland just north of the ancient legendary Jarung Khashor Stupa in the village of Boudha Nath. Upon completion of the monastery in 1976, His Majesty King Birendra of Nepal performed the official inauguration, the first time he had performed such a ceremony for a Buddhist monastery. Immediately thereafter, the 16th Gyalwang Karmapa appointed 24-year old Tulku Chokyi Nyima Rinpoche abbot of the new monastery.
This picture and text was sent to me by Shenpen Lhamo. Thanks.
Posted by Erik Pema Kunsang at 9/26/2005

Hummm, this is a question not related to this entry, but I wanted to ask you about a comment someone, I think it was you, made last night in Boston, re Rinpoche saying that he wanted to meet more scientists, because they had clear minds and were not superstitious-if i have remembered correctly.
I have been involved in the work of the Mind and Life foundation, so I am especially interested in this comment! Can you tell us a little more?

Wouldn’t you agree that the true scientific attitude consist in the willingness to discover. You have to be open to possibilities that lie beyond what you already know. And the opposite of that – being close-minded -- is actually unscientific and would hamper any kind of real progress. If we look at the horizon of the newborn infant, it has to be able to broaden as it grows up. The magical world that Tulku Urgyen presented or hinted at in Blazing Splendor is part of our rich human heritage.
I never saw him especially seeking out scientists, but he was willing to teach anyone. We did have many and long discussions about the scientific worldview that was somehow embedded in my mind through my upbringing that had to be “undone” or loosened up to see more clearly with an open mind – perhaps a more truly scientific attitude?

Do you have any more info about the founding of the Boudha gompa or even Nagi gompa? I'm particularly interested in how Tulku Urgyen decided upon the layouts and architectural aspects, what his influences were (texts, his home monastery?) and from whom advice was sought for the design.
Is there anyone still around who knows about this side of things?

Yes, I do. Nagi Gompa looks exactly like his monastery in Nangchen and also like the retreat center at Dzong-go Ling, which in Blazing Splendor is named Fortress Peak.

Picture was taken in the first months of 1978.
Dilgo Khyentse Rinpoche was residing at the White Gonpa (or "Tulku Urgyen's Gonpa") and for most of this time giving the transmission of the Chokling Tersar. During the three or four months Rinpoche was there, he lived in the main temple, more or less for the entire duration. When he came down from the teaching throne in the late afternoon, some big pieces of red cloth would be drawn between the pillars around where he was. A mattress and bedding would be arranged on the benches next to the throne where the tulkus had been sitting on during the day. He would sit, eat, and sleep in that enclosed part of the temple. A loo would be carried in when needed, and people would vacate the little space between the red sheets for just a moment. He would be surrounded by people 24/7, but he never seemed to mind. In fact he always seemed joyous and received everyone with warmth and complete attention.